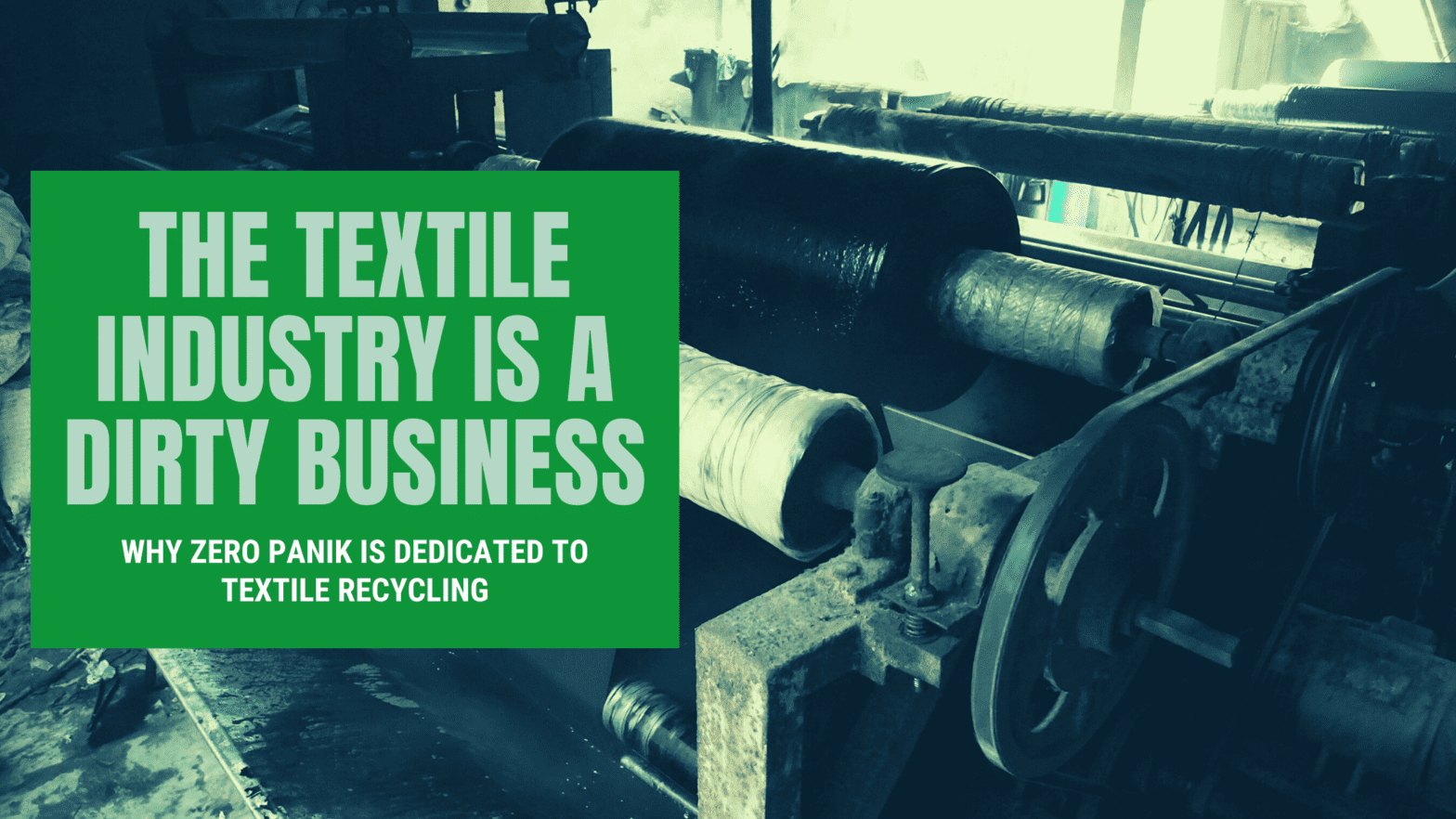 The Textile Industry is a Dirty Business

Why Zero Panik is dedicated to textile recycling

The world of fashion allows individuals to freely express their creative selves, but behind the glitz and glamour lies a dark underbelly. As the calls against climate change and social inequities grow stronger, we can no longer ignore the fashion industry’s impact on society and the environment.

The textile industry also has a huge impact on water consumption and pollution. 93 billion metric tons of H20 are consumed by the fashion industry annually. To put that in perspective, that’s about half the amount of water Americans drink in an average year. Approximately 17 to 20% of global industrial water pollution comes from textile dyes which may contain toxic chemicals. The industry is also responsible for the abundant use of fertilizers, pesticides, and other harmful chemicals.

There is also a steep price to pay for cheap clothing and never-ending “sales”. From a social perspective, the industry is known for various human rights violations, such as disturbingly low pay, forced labor (including child labor), and hazardous working conditions.

These issues are further multiplied by the number of clothes we buy and the length of time we own them. Americans buy five times more clothes than they did in 1980 and dispose of them after a few short years. This short cycle between purchase, usage, and disposal is commonly referred to as “fast fashion”.

The problem with fast fashion is that clothing is intentionally designed for disposal. Fast fashion = fast waste. This cycle allows the industry to manufacture more clothing to generate more profits but also encourages consumers to be wasteful. According to the Ellen MacArthur Foundation, 87% of clothes are either thrown away (landfilled) or burned (incinerated). Around the world, a truckload full of clothes gets thrown away every second.

The Journey of Clothing Donations

Of course, not everyone puts their unwanted garments straight into the trash bin. Most would prefer to give their textiles a chance at a second life. However, just because an item has been donated doesn’t mean it is rescued from the trash heap.

Unfortunately, there isn’t much demand for secondhand textiles. One report states that 28% of people donate clothes, but only 7% of people shop for used clothing. This disparity creates excess clothes that thrift stores need to contend with. Some articles of clothing are discarded, whereas other donations get sold into secondhand markets around the globe (the US’s 8th largest export).

Although sending heavily discounted clothes into low-income areas seems generous, it can actually hurt local textile businesses which can impact the economy (most notably, this happens in Sub-Saharan Africa where a third of global donations are sold).

And yet, not all clothes in secondhand markets are claimed. The Atacama Desert in Chile, for example, has recently made headlines for becoming a dumpsite for unsold and unwanted textiles (39,000 tons a year). Most people would be surprised to learn their donated clothes could end up littering a beautiful South American desert!

Can Textiles be Recycled?

You may be asking yourself, can textiles be recycled? Technically yes. However, we should first define what “recycling” means because definitions can vary.

Reusing clothes is one of the easiest and most effective ways to recycle clothes. This could include repairs or shop at a thrift store (including online “re-commerce” sites). When we reuse clothing, we extend the life of that garment and decrease its environmental impact (especially if the purchase of new items is prevented).

But of course, not all clothes can be reused. Usually, when people hear about textile recycling, they assume a garment gets taken apart and turned back into a new garment, but that is rarely the case. The EPA estimates that 13% of clothes are “recycled”. However, a large portion of that clothes is actually “downcycled” into something of lesser quality, such as rags or insulation fluff.

So can a T-shirt become a T-shirt again? Yes, it is possible, but still very uncommon. If we break down the 13% stat from earlier, 8% is downcycled and another 4% is lost in processing (likely disposed of due to contamination). That leaves only 1% of clothes that are actually recycled (aka a T-shirt becoming a T-shirt). Yes, you read that right: only 1%.

Why Don’t We Recycle More Clothes?

Even though recycling is technically possible, it’s no easy feat. The process is both complicated and expensive. Textile recycling involves breaking down the garment, either mechanically or chemically, to turn it back into fiber that can be used to create a new article of clothing.

When clothes are mechanically recycled, the fibers are separated physically without changing the molecular structure of the fiber. The mechanical recycling process requires less energy and water than manufacturing a garment from scratch. However, shredding a garment reduces the quality of the fibers which means virgin fibers may still need to be used. The process is further complicated if the original garment contains mixed fibers, which are more difficult to separate.

Chemical recycling involves dissolving garments down into a liquid state which can then be used to make new fibers. Many different types of chemical recycling exist with different methods and solvents used to break down the garments. Some versions may even be able to turn recycled fibers into virgin-like quality. At this time, the technology for chemical recycling is still in its infancy and too expensive for wide-scale commercial use.

The idea of Zero Panik Textile Recycling was born from the founder’s struggle to recycle her toddler’s unusable clothes. A simple home cleaning project helped to uncover uncomfortable truths about clothing donations and downcycling practices.

The Zero Panik Textile Recycling bin is unlike any other bin. Strategically placed in apartment buildings and other convenient locations, consumers can drop off their unwanted textiles for points towards future purchases. In collaboration with manufacturers, textile processors, repair specialists, and secondhand shops, Zero Panik Textile Recycling aims to reduce downcycling and landfilling to close the loop on fashion.

Read more from the same author:

We use cookies to ensure that we give you the best experience on our website. If you continue to use this site we will assume that you are happy with it.AcceptPrivacy Policy